1. Build and Set up Base Station

First of all, we need to have a base station which receives transmission from remote sensors and stores / processes / redirects the sensor data. In this case, we will be using a Raspberry Pi Model B, which the user can purchase from the following link: 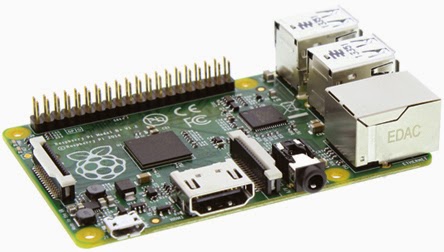 Apart from the above Raspberry Pi Model B base station, we will also purchase a set of accessories that go with it (e.g. for radio transmission, gateway, etc): 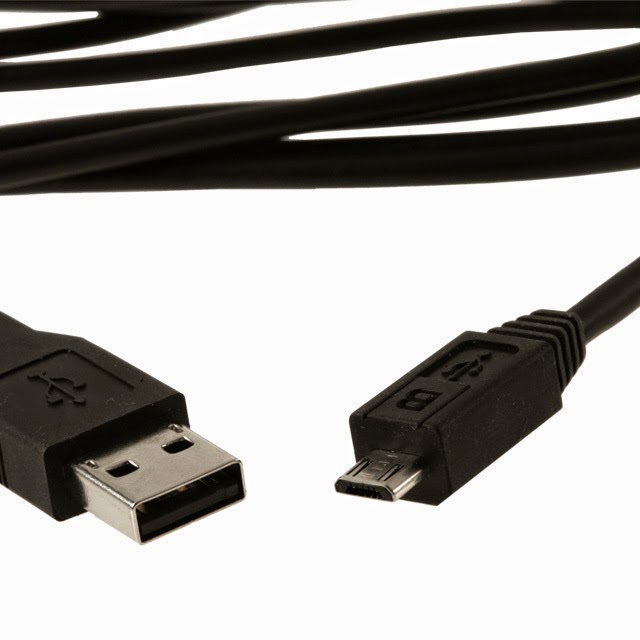 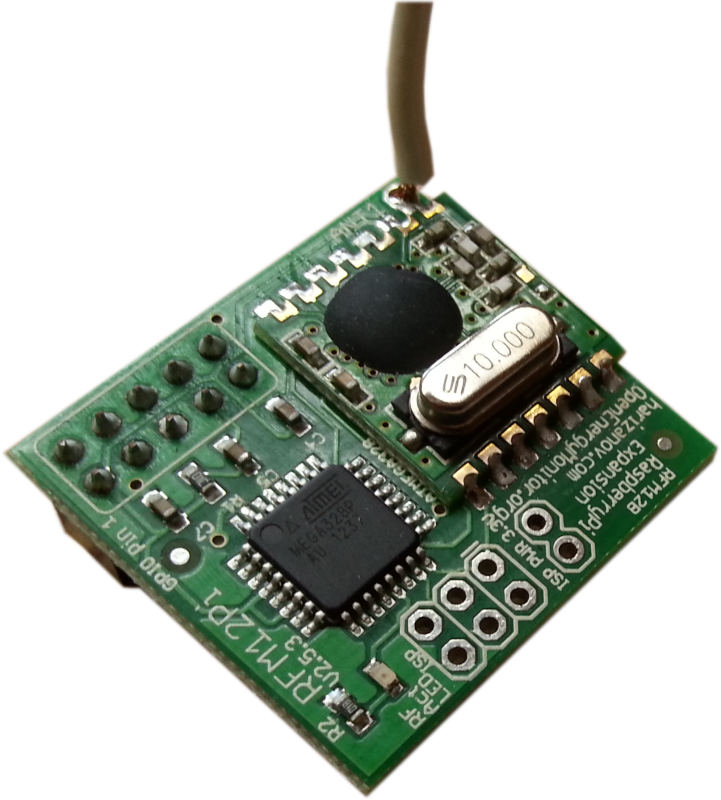 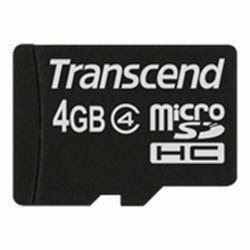 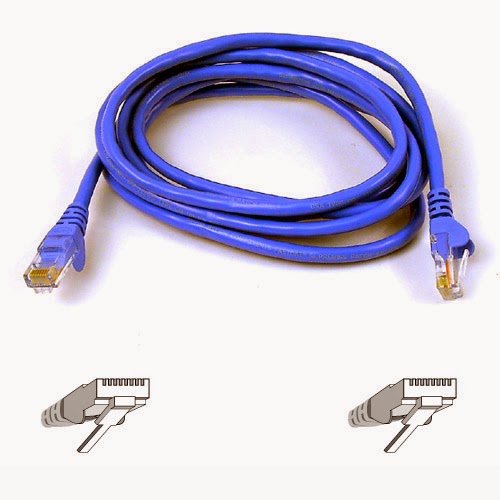 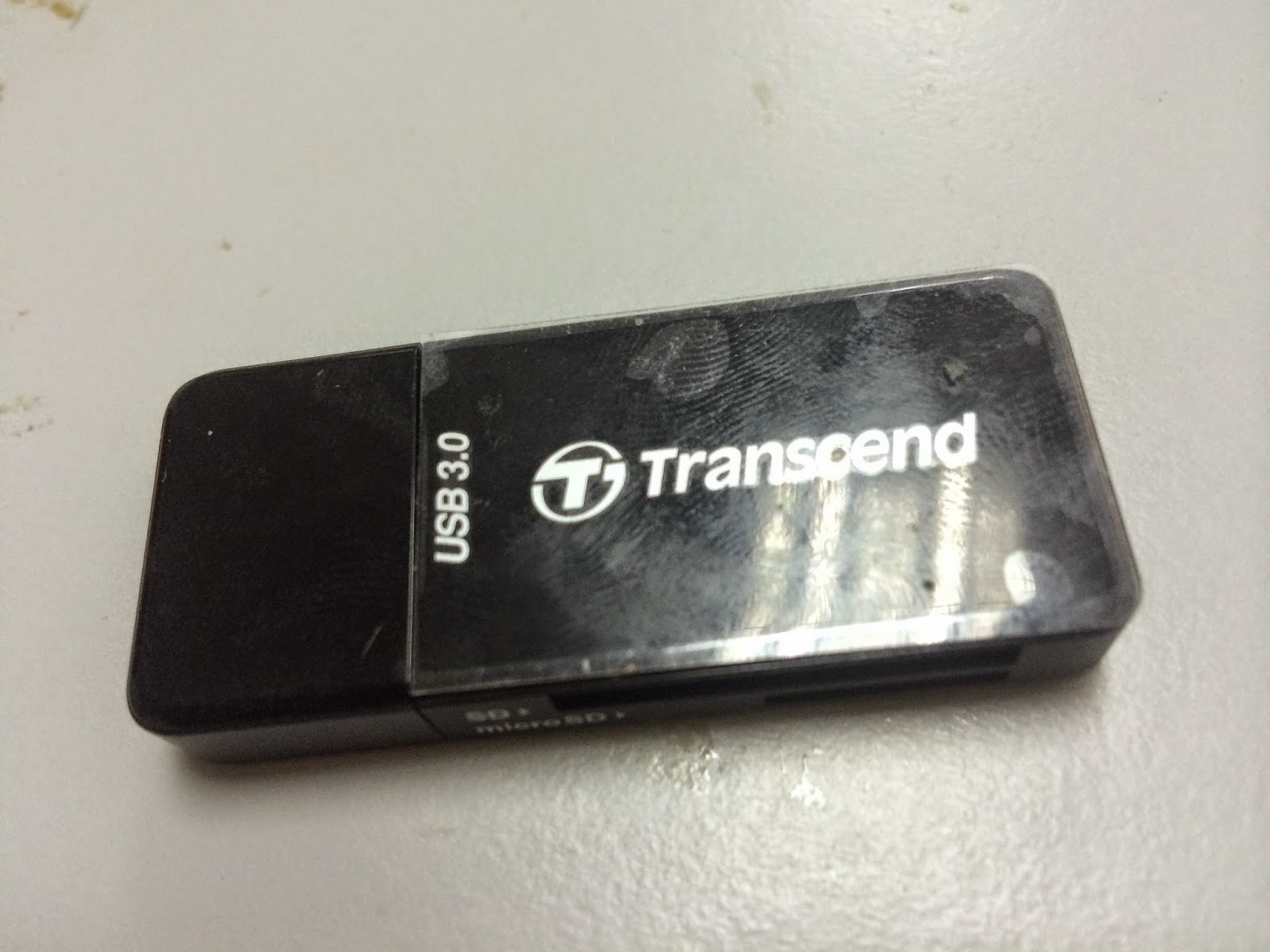 1.2. Assemble the base station 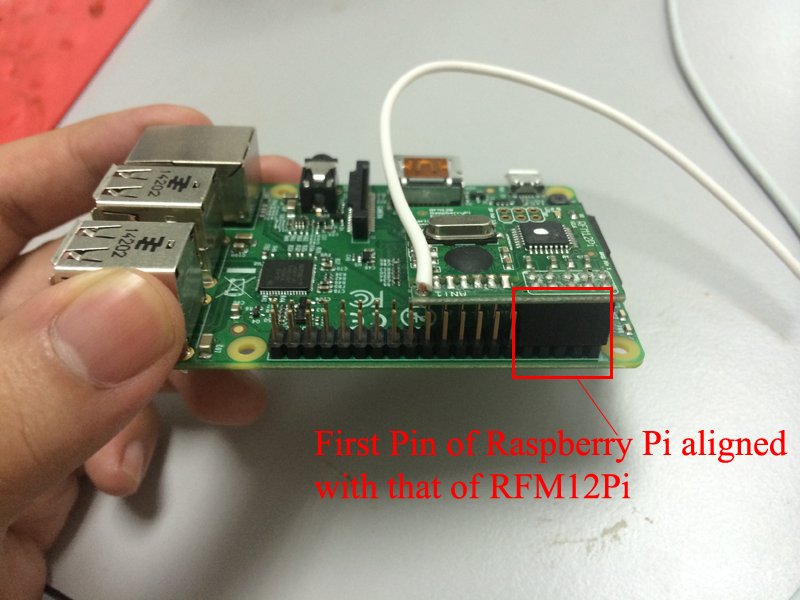 Next plug in the microSD Card as shown in the figure below: 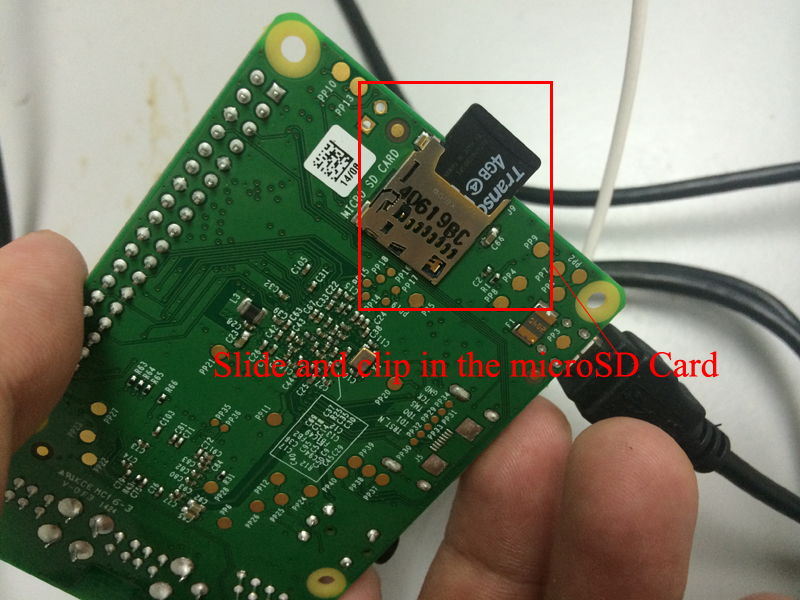 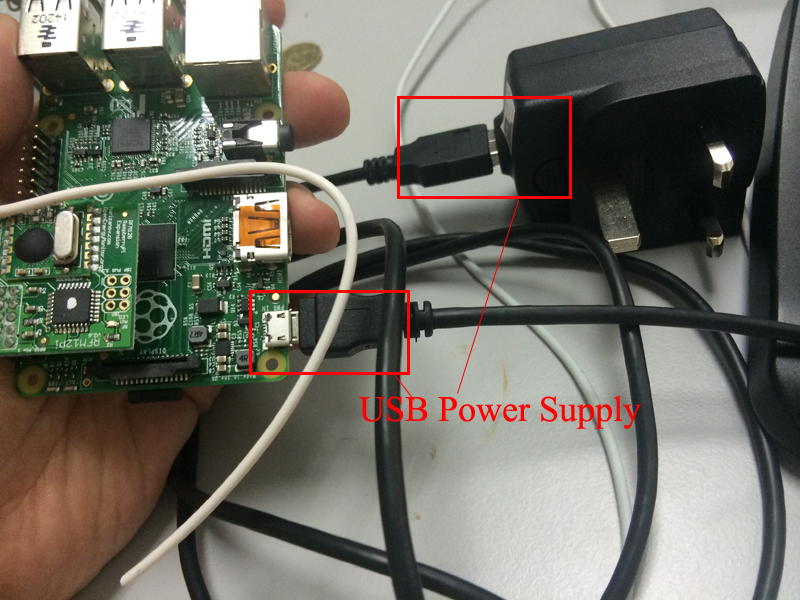 Finally connect the Ethernet cable between the Raspberry Pi and the PC as shown in the figure below: 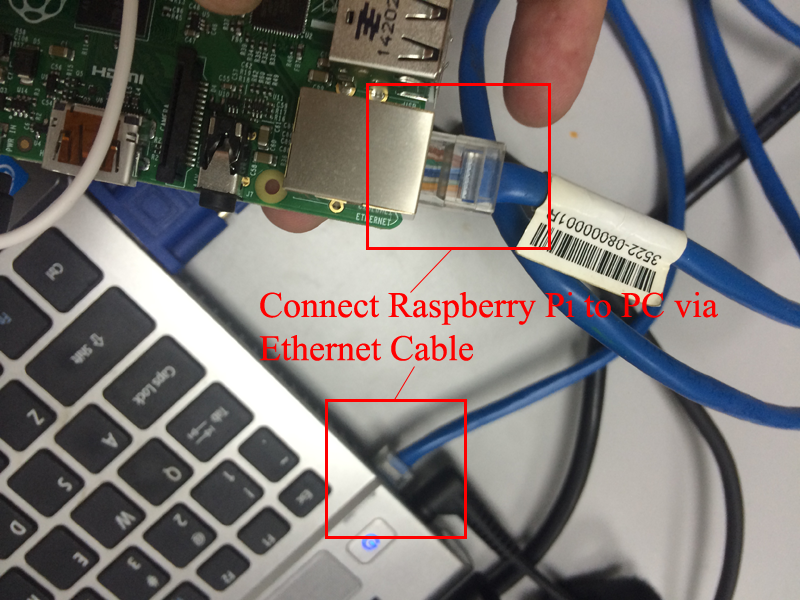 To do this, open the "Network and Sharing Center" on the Windows platform, then click the "Change Adapter Settings" link on the left panel of the Network and Sharing Center. Now right click the "Local Area Network" which is the Ethernet adapter, and select "Properties" from the pop-up menu. In the properties dialog popup, select the "Networking" tab and select the "Internet Protocol Version 4 (TCP/IPv4)" from the list box, and click the "Properties" button below the list box. Enter the IP address as "192.168.2.1" and the mask as "255.255.255.0", as shown in the figure below 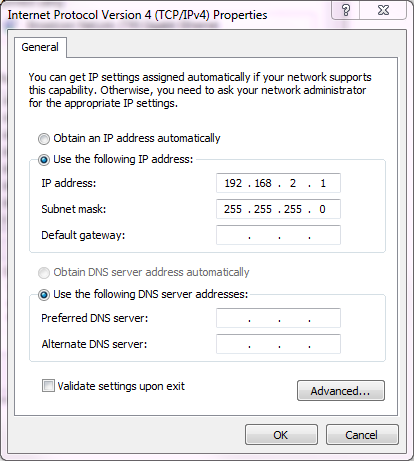 Note that if your PC or laptop also has wireless connection, you may want to allow the Raspberry Pi to access internet via your PC wireless connection, in that case, right click on the "Wireless Network Connection" in the network adapter settings page and select "Properties", and check "Allow other network users to connect through this computer's internet connection" with "Local Area Connection" select as the "Home network connection" in the combo box below it, as shown in the figure below, then click "OK" (Note that if this is the case, your IP address in the "Local Network Connection" Ethernet adapter settings will be changed to 192.168.137.1). 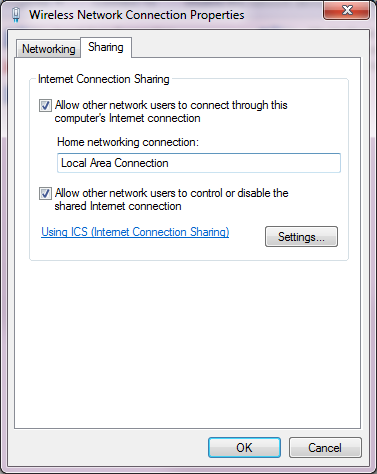 2.2. Configure a DHCP server for the Raspberry Pi base station

Once this is done, go and download the DHCP Server from http://www.dhcpserver.de/cms/ . Unzip it and double click dhcpwiz.exe to DHCP Wizard (i.e. dhcpwiz.exe in its root folder). On the wizard, click "Next" and then select "Local Area connection" from the Network Interface cards dialog (if you notice that "192.168.137.1" does not appear as the address for the "Local Area Connection", you can turn on the power of the Raspberry Pi temporarily for the Ethernet adapter to pick up this, then turn off the Raspberry Pi base station again until the end of this section), and click "Next again", as shown in the figure below: 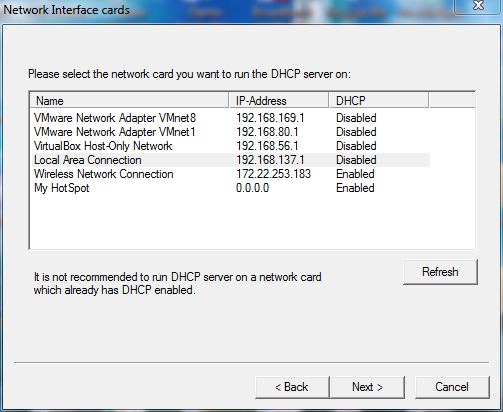 leave the next screen "Supported Protocols" as default and click "Next", as shown in the figure below: 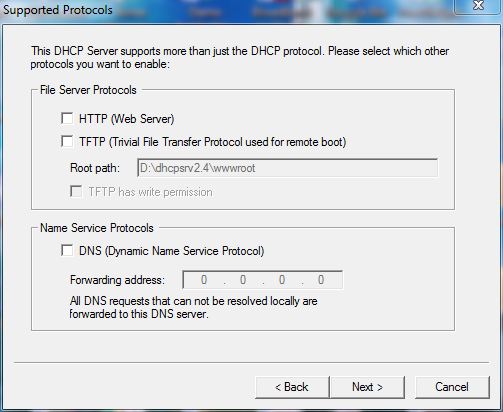 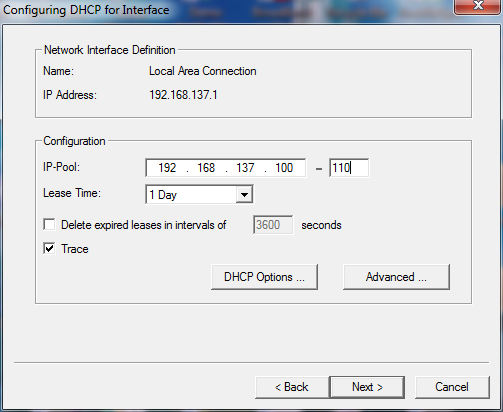 In the next screen "Writing the "INI" file", check the "Overwrite existing file" option and click "Write INI file" button. as shown in the figure below. Now click "Next" to proceed to the next screen. 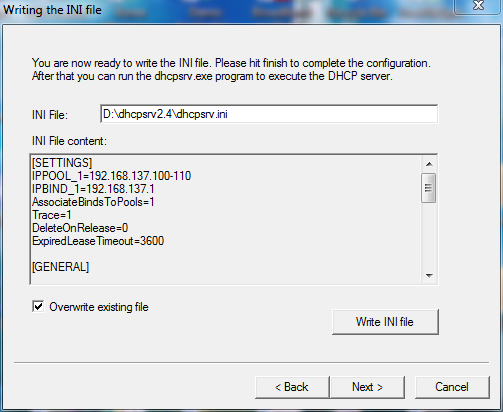 In the next screen "DHCP configuration completed", click the "Install", "Configure" and "Start" buttons and click "Finish" button to complete the wizard, as shown in the figure below: 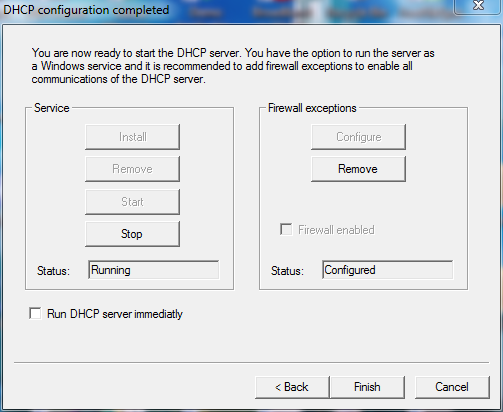 Now double click the dhcpsrv.exe to launch the server (i.e. dhcpsrv.exe in the root folder) in the "DHCP Server" screen as shown below, click "Continue as tray app" button. 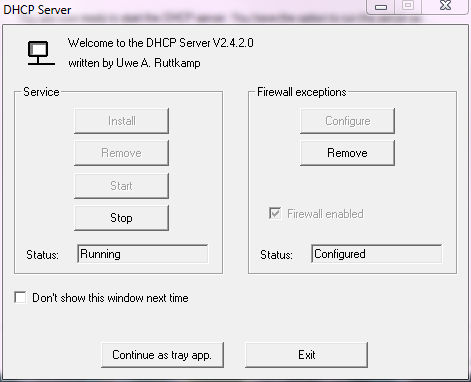 2.3. Use PuTTY client to access Raspberry Pi base station

Now download the free ssh and telnet client, PuTTY from the following link and unzip.

double click to launch the PuTTY client and enter the "192.168.137.100" DHCP address into the PuTTY configuration dialog as shown in the figure below: 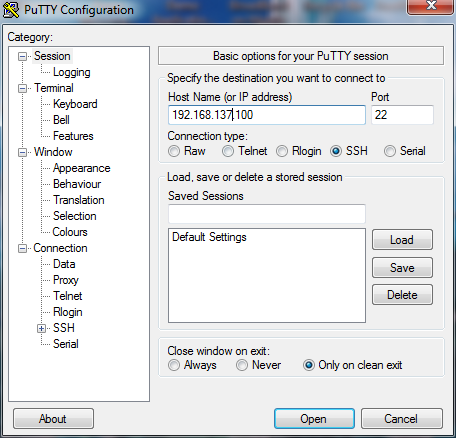 Click "Open" button, the user will be presented with the PuTTY console as shown in the figure below: 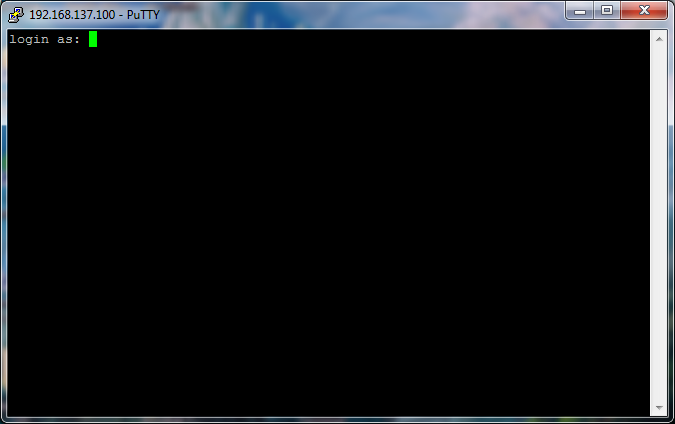 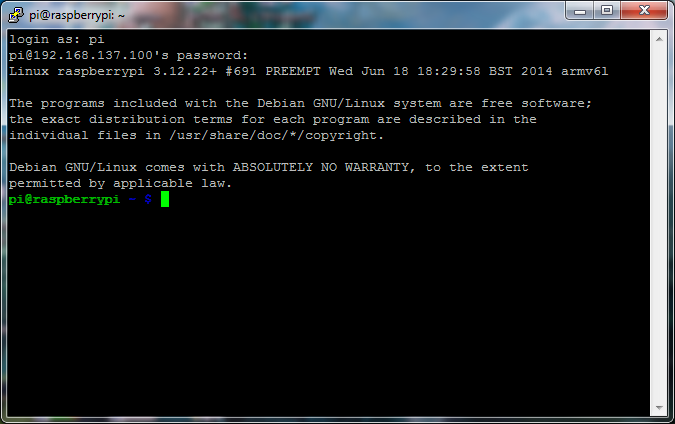 3.1. Configure the date for the Raspberry Pi base station

Before we proceed to make other changes to the base station's gateway. the first thing we want to do is to configure the date. To do this, first check the current time by entering the following command in PuTTY

The current time will be print as shown in the figure below: 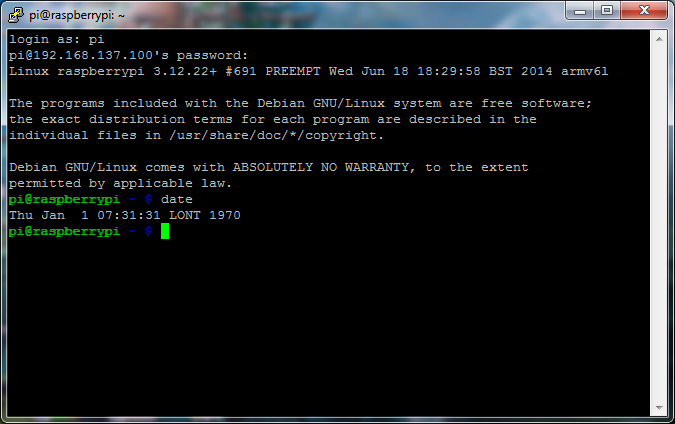 The time is obviously wrong. To correct this, run the following commands: 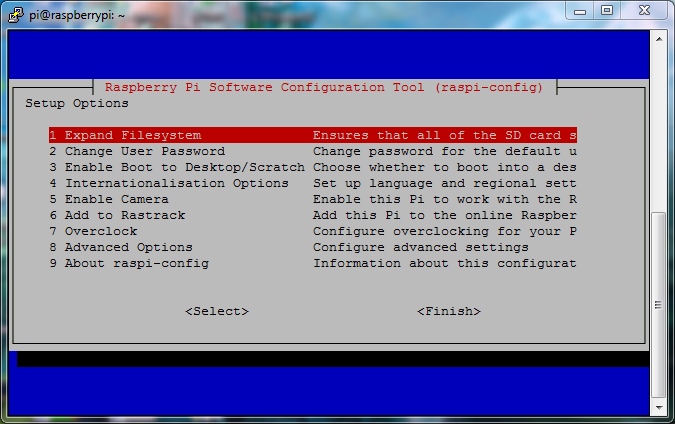 Now select "4 Internationalisation Options", then select "I2 Change Timezone", then
follows the screens to select the date and regional settings and select "<Finish>"

Once this is done, enter the following commands to update the current date and time

Once this is done, the system is in correct time format. At this point the time should be replaced with your current time. Now that if you do not perform this step, later your input and feeds at your local emoncms web will have "inactive" as its "Last Updated" value since they would count from 1970 instead of the current time. This is a common error. (PS: based on my experience, it is not necessary to stop and restart NTP server, simply reset the date will do, also the raspi-config only need to do it once).

Now we can start the local emoncms preloaded in the microSD card, by entering the following commands in the PuTTY client: 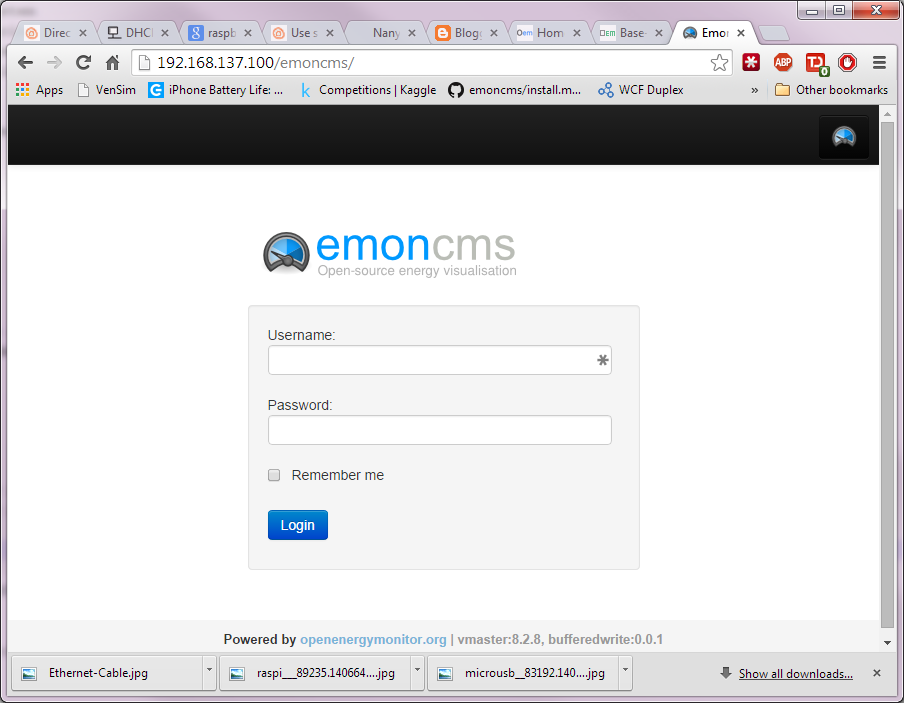 You can login using the default username and password here:

Notice the Write API key and the Read API key at the lower left corner of the account page, we would show how to use the write API key later to modify the emonhub.conf file so that remote sensors can post data onto the emoncms.

The mysql allows the user to explore a bit more of the Raspberry Pi base station's database, to this, enter the following commands in the PuTTY client:

This will prompt user to enter the password, the default password is "raspberry", key in and press ENTER.

Now in the mysql console, you can list down all the tables by entering the following command:

You will notice there is a users table, which stores the user accounts. Run the following command to see its content

Now we have the base station up and running, we would need to set up the remote sensors, there are two different remote sensors that we would use in this blog, the name and link to buy are listed below: 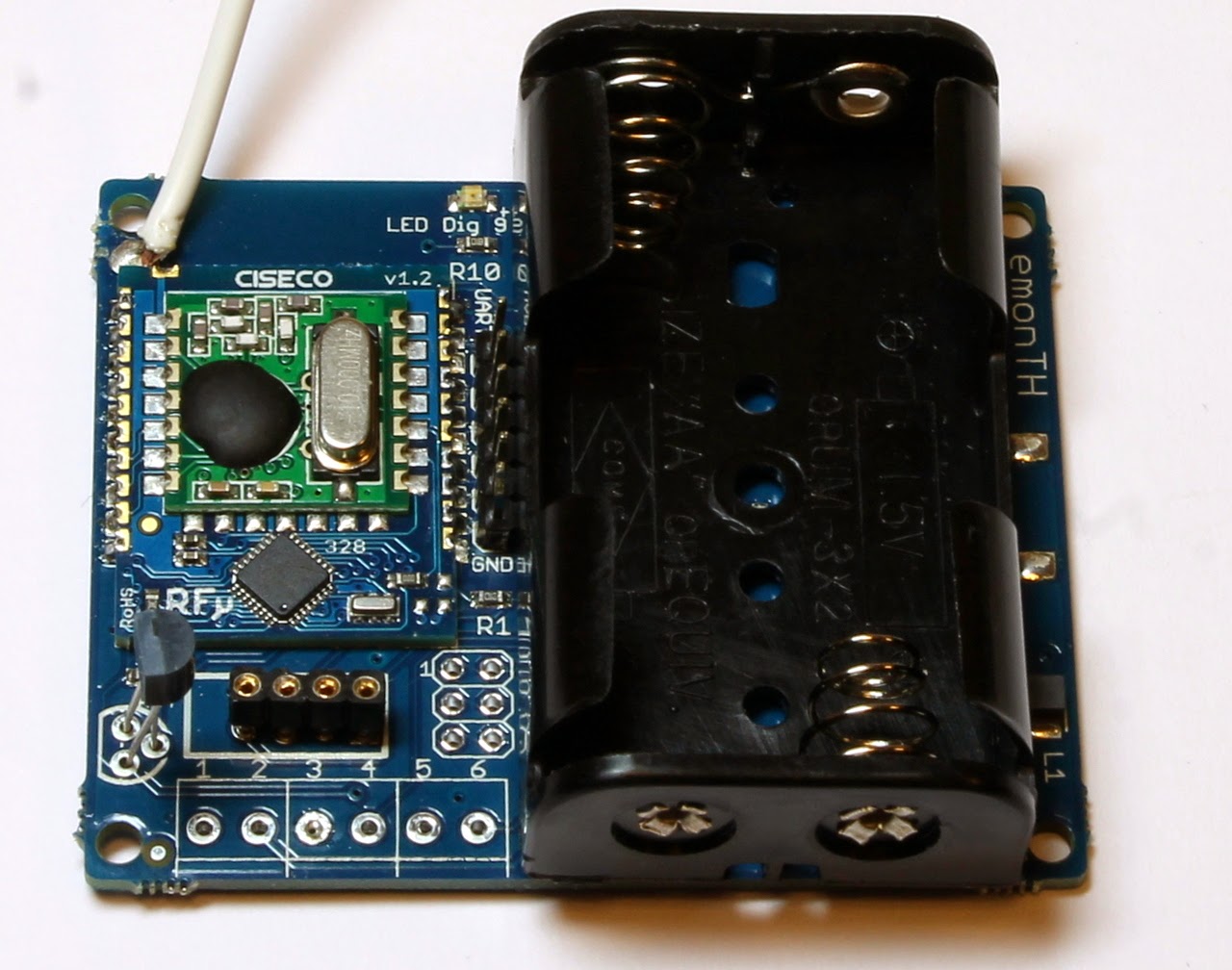 The emonTH is pretty standalone and only requires A5 battery, for the emonTx v3 to work, we need the following components:

The figure below shows how the emonTx v3 is assembled from the current sensor CT and power supply as shown below: 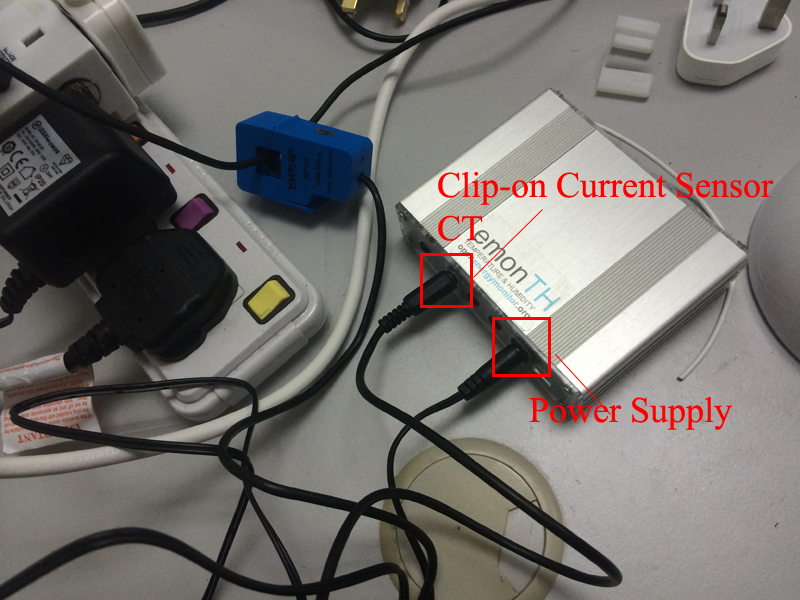 Now that the base station and the remote sensors are ready, we have even made sure they can communicate via RFM12 radio transmission, the final step is to allow remote sensor data to be posted to the local emoncms, this can be done by replacing the write api key in the emonhub.conf file. To do this, in the PuTTY client, enter the following command:

this will show the emonhub.conf in the nano text editor, search the line starting with "apikey = " and replace the "xxxxx...xxx" with your write API key. as shown in the green region in the figure below. 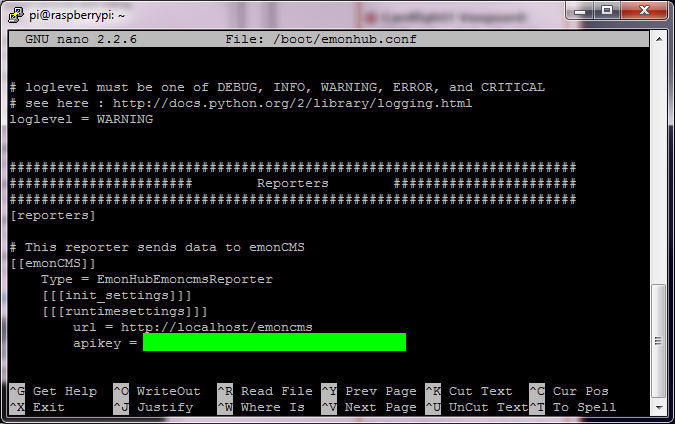 Once this is done, press "Ctrl + o" to save and "Ctrl + x" to exit.  now run the following commands:

then navigate to http://192.168.173.100/emoncms and log in using username=raspberry and password=raspberry, you will see the inputs shown as follow: 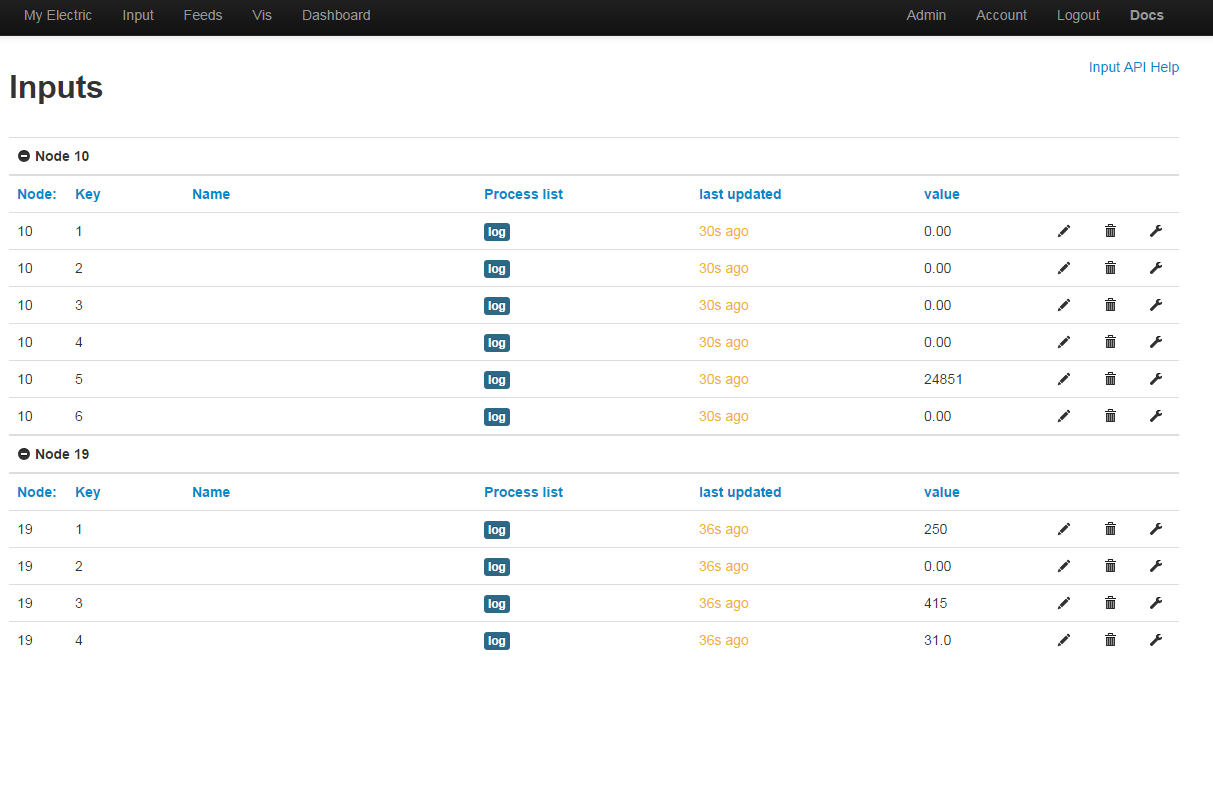 Node 10 is the emonTx v3 power measure (from a single current sensor CT) and Node 19 is the emonTH which measure temperature and humidity. Note that edit of each row allow user to specify a name of that measurement. Also the user can edit each row so that a log to feed is added for each input measurement, as shown by the "log" icon in the Process List column, and with this set, user can see the feed in the "Feed" page as shown in the figure below: 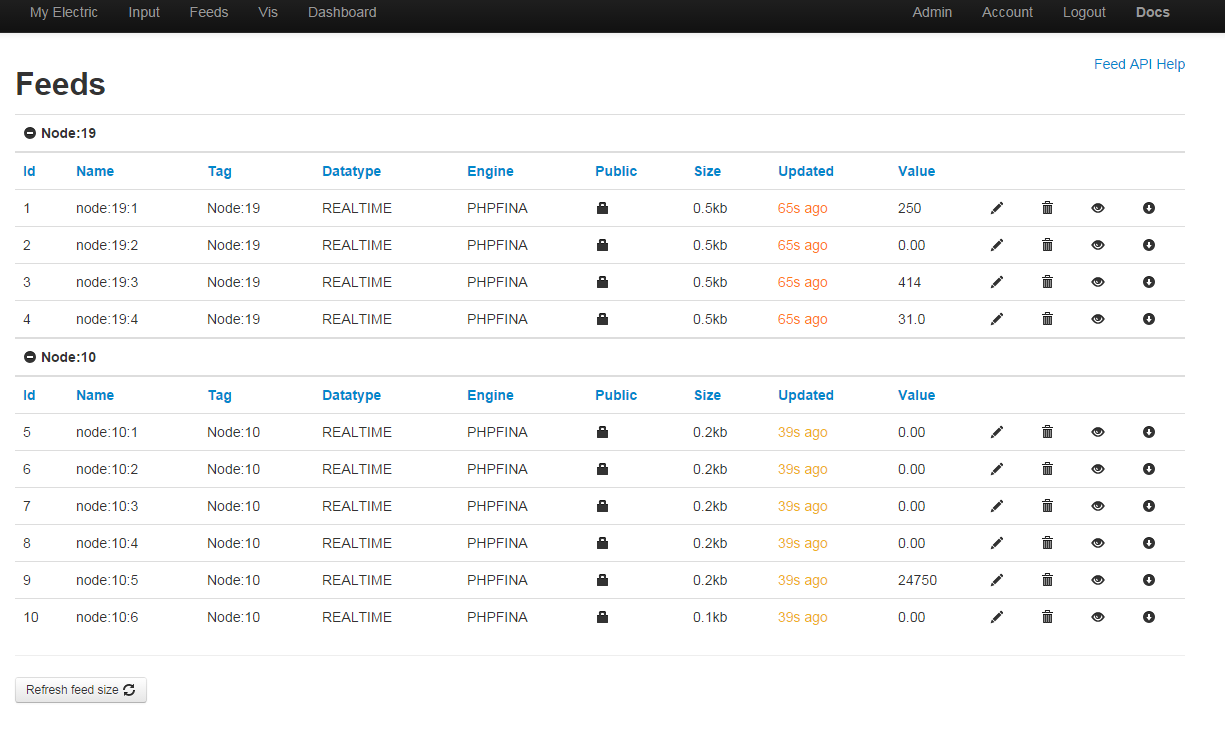 If the user is using third-party software for processing and analyzing sensor data / feed from the remote sensors, they can use a set of web service in terms of csv, json, xml outputs, some examples are as below:

Below is the screenshots showing the feed in an application that i developed: 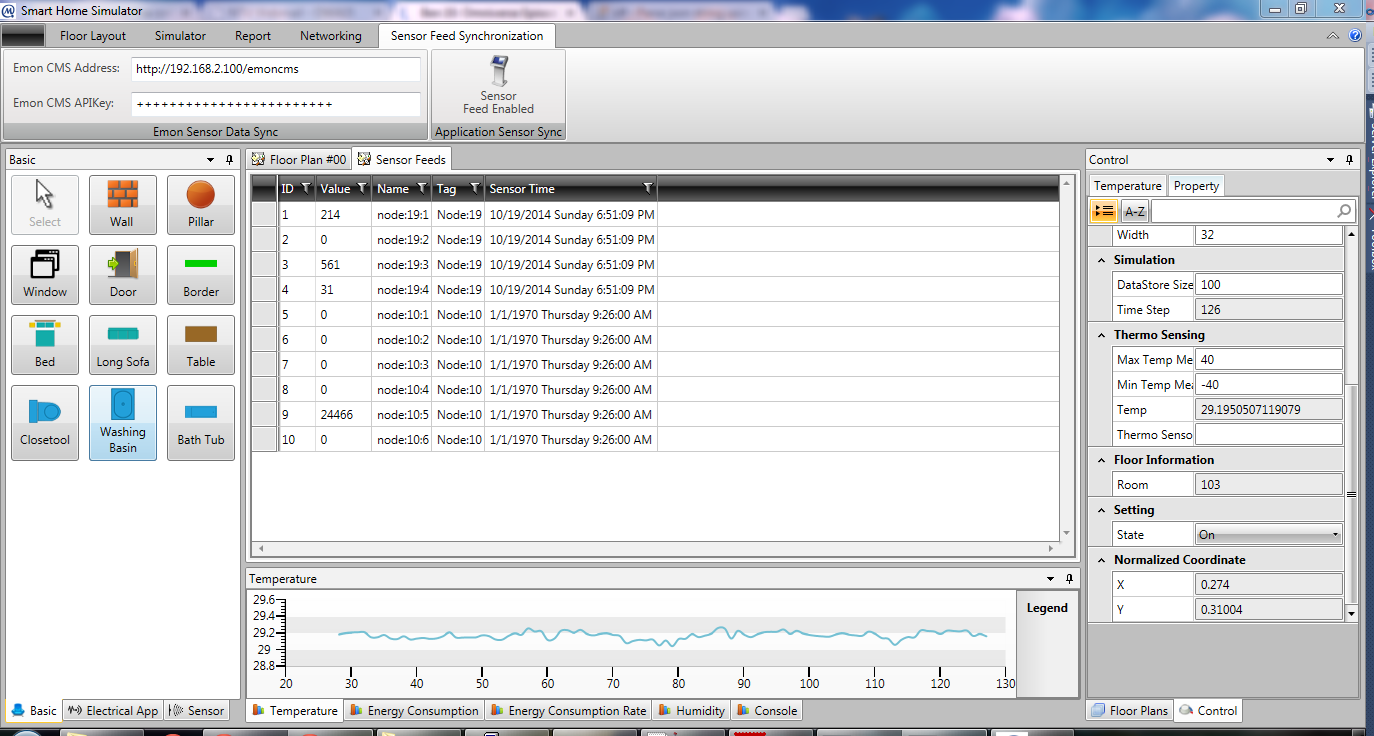 7. Other Useful Links and Pointers